A little sleuthing on the Internet can give us some of the most interesting things.

All I can say is - oh, to have been there.
Pictured below is what I believe to be the first commercial issue of the Florence Foster Jenkins recordings, a 10-inch LP containing only the Jenkins tracks.  It was later released on a 12-inch LP, deleting "Serenata mexicana" and including the "Jenny Williams and Thomas Burns" Faust recordings on the reverse.  There is also a two-45 rpm record set of the same material, which I own, but can't get my hands on at the moment.  She made her recordings at Melotone Studios in New York City, which was a label that made "vanity" recordings.  In other words, you paid, you recorded, you got boxes of records.  At least one of these (the Magic Flute aria) was sold commercially (and actually reviewed in record magazines!), but these were mostly made available to friends and admirers. 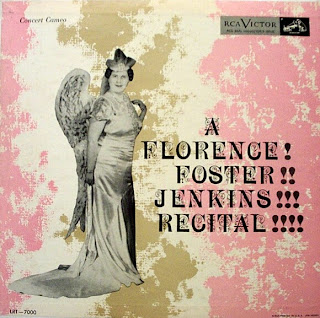 And even though I have shown it elsewhere, here is a copy of one of the Melotone 78 rpm records.  I am proud to own a complete set of the known extant recordings, and this one is by far the most scarce. 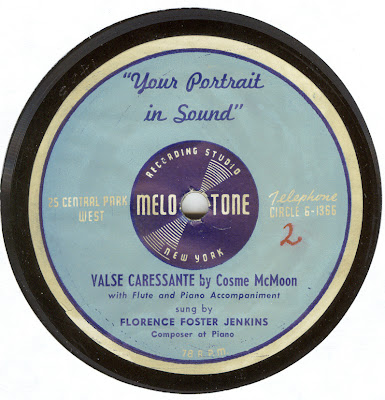 This DVD pictured on the left, produced by Donald Collup, is a highly recommended documentary of the life and times of Lady Florence.  It is beautifully and sensitively done, and gives the viewer a great deal of insight as to what drove her to perform.  The old BMG  (formerly RCA Victor) CD "The Glory (???) Of the Human Voice" is the standard old collection of Flofojen chestnuts, it is readily available, but does not include the "Valse caressante" featured on the Lennick "Murder on the High C's" on Naxos, or Gregor Benko's "The Muse Surmounted" on Homophone/VAI.  "The Muse Surmounted" is reviewed in depth on this blog, and that post may be read here.  I am probably not exaggerating when I say that my sense of humor, and my love of music, has been influenced by Florence Foster Jenkins, as I had a vinyl LP copy of her Victor album since my teenage years, and modeled a stage persona from my college years, "Tessie Tura", after her.  It's hard to deny that through the cacophony, the lack of rhythm, and frankly the lack of much else that marks even mediocre singing ability, that there was no lack of joy in her singing,
﻿
Posted by Rick Robertson at 8:39 AM

Rick Robertson
My interest in music can be traced back to my toddler years - I have photographs of me at the age of two - in diapers, playing 45 rpm records on a phonograph. I started piano lessons rather late (at the age of ten) and studied at Jacksonville (Alabama) State University, earning a bachelor's degree in piano performance. I also compose, preferring to write music with my students in mind.